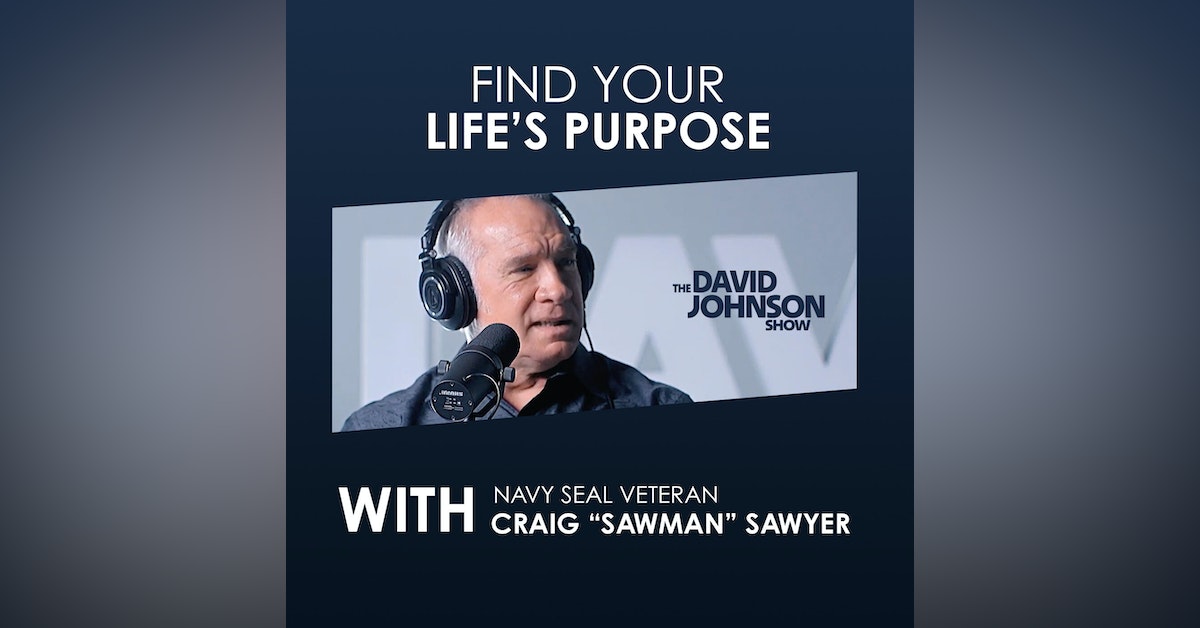 Craig Sawyer, a Navy SEAL veteran, talks about how building his network over the years helped bring him opportunities to work in television, non-profit and more areas after his military career. Click here to read more about Craig Sawyer’s military background.

“The David Johnson Show” is a national voice and storyteller of real-life experiences of our military community, in and out of active duty. TDJS highlights points of interest in our American military and veteran subculture. Each show episode showcases a different guest with a different story. Sign up to get notified of new episodes at:  and subscribe to TDJS YouTube channel.

David: “All this time, military...Same industry but then you've branched out into many different industries. You've done stuff with film and stuff in Hollywood, and stuff with non-profit, stuff in business. We talked about the course in Stanford that you went to. The connections you've been making all this time through all these years. I'm sure it have to just been phenomenal and help you out along the way too.

Craig:  Oh, yeah. In the intelligence community, I met really, really strong people -- station chiefs and so forth -- that were just very sharp, very capable, good-hearted patriots. Same thing in the diplomatic community. Several people that I met along the way. I met this really good quality person with… Maintained those personal friendships over the years. Same thing with some of the guys in the Air Marshal Service, veterans and great guys that are still...all the guys that work. I had 210 agents to manage for a while for about six months, until they brought this guy in. A lot of guys that I worked with, so maintain all those friendships as well. They're just a lot of good people that I reached to now when I want to solve problems. I still have this network from this diverse journey and wearing all these hats over the years I've worked in all these different capacities. I know some great people and it's nice to know them and have them on speed dial, so to speak.”

David:  Did each journey excite you in a certain way and you felt passionate about what you were doing at the time?

Craig:  Yeah. I really, as a warrior in the SEAL teams, I felt like that was my purpose. I had this burning fire in my gut to go make war on those who are planning to come here and ruin our security. I did not have any sense of humor about it. I was dead serious and I wanted to go just kick the pants out of the bad guys in and teach them a lesson. Now I've found a different passion, but along the way I could see my vision kind of morphing. I'd served well as a warrior, decorated for heroic service in combat. It went well for me.

Then when I started the International Coalition Against Poaching, ICAP, a few years back after I came back from Africa. Animal Planet hired me to film a three-part special called "Battleground Rhino Wars -- Celebrate Africa." There was a guy that was a African Special Forces veteran that ran a wildlife documentary company. Some of his friends ran a security company there that run security for a lot of the private reserves for the animals over there.

He said, "You know, Craig, it'd be really smart if we let you run operations, bring your team over here, run operations against the poachers, help save some of the last of the endangered rhinos and film it so that the world can gain understanding of the problem. Then we can get better funding to safeguard the last of an endangered species, and to help strengthen the enforcement and increase the penalties."

Because the risk versus reward dynamic is inverted, they can get almost half a million dollars per horn, but only a couple weeks in jail if they get caught. We need to change that. He wanted to use the power of media to do that and I thought it was a really smart solution.

David:  Interesting. Why'd you get into poaching prior to that?

Craig:  That's why I got into it. I've always loved animals since I was a small boy. When Peter, this is his name, a Special Forces Vet from South Africa called me and goes, "Hey, I'm in Hollywood and everybody's telling me I have to have you."

David:  Because you had already started your organization.

Craig:  No, I hadn't. I was doing "Top Shot" on History Channel. Serving as an expert for firearms. Just teaching people how to...

David:  So from the beginning they said, "Come to Africa, bring your team out here."

Craig:  Yeah. He says, "Craig, people are telling me you got to be the guy to head up this team. Why?" and I said, "Man, I don't know why. I'm just a regular dude. My heart's good and I love animals. Maybe that..." I said, "I served as a DEVGRU operator. I was a Marine. I've been around. I'm a combat vet. I'm not scared. I got a good network."

He goes, "OK, let's have a look at ya....Everybody's telling me you got to be the guy." We put it together, I went over there. I chose a small team for the pilot episodes. We went over there for six weeks. We ran operations and filmed it.”

“The David Johnson Show” is a national voice that talks about points of interest in the American military and veteran subculture. Each show episode showcases a different guest with a different story. Sign up to get notified of new episodes at: https://thedavidjohnsonshow.com.